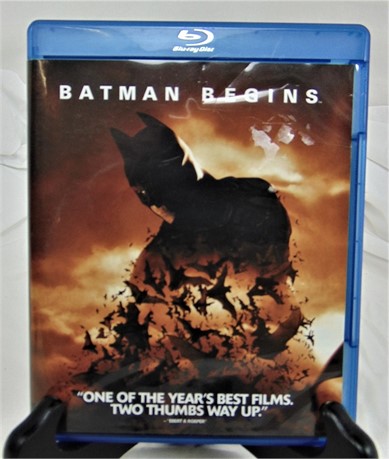 Batman begins blu-ray action/adventure this explores the origins of the batman legend and the dark knight's emergence as a force for good in gotham. In the wake of his parents' murder, disillusioned industrial heir bruce wayne travels the world seeking the means to fight injustice and turn fear against those who prey on the fearful. Christian bale michael caine.

THE DARK KNIGHT IN SEALED PACKAGE  -

Christopher Nolan steps back into the director's chair for this sequel to Batman Begins, which finds the titular superhero coming face to face with his greatest nemesis -- the dreaded Joker. Christian Bale returns to the role of Batman, Maggie Gyllenhaal takes over the role of Rachel Dawes (played by Katie Holmes in Batman Begins), and Brokeback Mountain star Heath Ledger dons the ghoulishly gleeful Joker makeup previously worn by Jack Nicholson and Cesar Romero. Just as it begins to appear as if Batman, Lt. James Gordon (Gary Oldman), and District Attorney Harvey Dent (Aaron Eckhart) are making headway in their tireless battle against the criminal element, a maniacal, wisecracking fiend plunges the streets of Gotham City into complete chaos.

There are no questions for this listing.